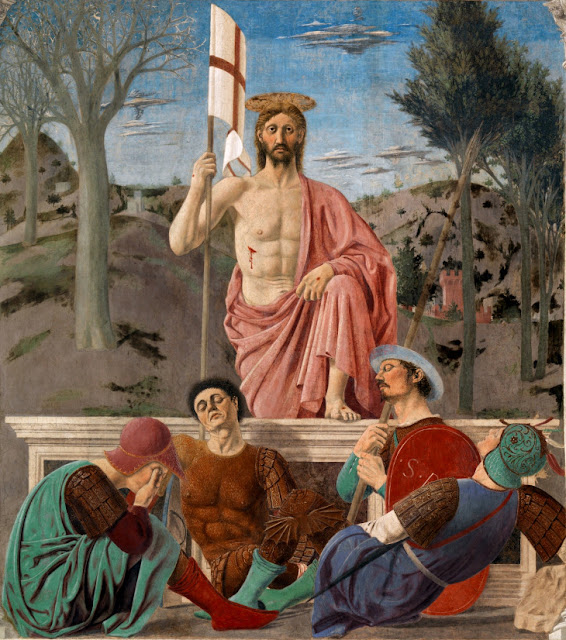 Christianity is the only thing that can save us from the increasingly dystopian and evil world that is coming into being. It alone carries enough truth to overcome the lies with which we are bombarded on a daily basis as the vice of materialistic atheism is tightened. Or, at least, Christ does. Because Christianity itself as it has come to be nowadays has all too often degenerated into a religion that exists only along horizontal lines. This is to say it is understood as relating to the interaction between human beings on the earthly plane. It is becoming more of a social than a spiritual thing involving how we treat our neighbour, seeing him as an earthly being in a material light and not as a soul in need of salvation. But real Christianity relates to our relationship with God and is therefore to be understood vertically. Everything else flows from that. There is a horizontal dimension but it is very much secondary to the vertical just as matter is secondary to spirit, quite clearly so since it only exists as an expression of spirit.

The materialistic focus of much modern Christianity has imitated the general moral focus of the post-modern world. This is because so many church leaders are bureaucrats rather than saints or even aspiring saints. So they follow rather than lead, and they follow fashion rather than truth. What is the motivating force behind atheistic morality (or pseudo-morality)? It is something like harm avoidance. So it is less concerned with the soul and how to bring the soul into closer alignment with God than it is with comforting, supporting and sustaining the earthly man. Equality is not mentioned in the Bible but it is the obsession of contemporary morality and the churches have fallen in with this, thinking it a good above all others. This is because they have misunderstood love and that is because they don't know love except as an ideological theory, something they feel they ought to have. They have failed to see that equality is really a spiritual evil because what it inevitably does is reduce the high to the level of the low. You can have quality or equality. You can't have both, not in this world and not, in fact, in any world. Even the angels and the saints are hierarchically ordered.

Equality is only possible with complete oneness which means either the chaos of unformed matter or the Night of Brahma when the universe has returned to an unexpressed, unmanifested state which is basically non-being. Creation is a disruption of oneness which breaks the perfect equality of non-being. Inequality is the essence of manifested life, the very foundation of the world, and the current movement to erase qualitative distinction and differences is an attempt to destroy cosmic order and reduce light to darkness. An inequality where the higher preys on the lower is obviously bad but this should not be used as an excuse to throw out the very notion of higher and lower for that is the basic principle of the structure of the universe, both in its material and spiritual forms.

Christianity as an organised religion flourished during the latter stages of humanity's childhood. It guided and instructed as a loving parent. Of course, many individual souls had moved beyond the childhood stage and these were often the ones who formed and tended Christianity, but the masses of people were in the childhood stage, spiritually speaking. However, over the last few centuries this has begun to change and you might now see the majority of people as being in a condition equating to adolescence. This is notoriously a very difficult time, one in which the individual rebels, throwing off the shackles, as he perceives them and as they may indeed be, of external authority. He is becoming an individual but unless he submits that individuality to a higher inner guidance he risks losing his way, and this is exactly what we have done. We should have moved beyond unquestioning spiritual obedience to an awareness of divine truths based on inner perception but we have refused to move out of our adolescent phase into adulthood. Our very culture reflects that. And official Christianity has not been able to keep up with the change.

The solution is in Christ as, of course, it always was. The only way out of the confused mess we have made for ourselves is to rededicate ourselves to him which means turn to the reality he represents. The reality of Christ is beyond any church though the church has guarded and protected the spiritual flame for two millennia and even independents like me must accept that without this protection our spiritual independence would not be possible. I can only know Christ inwardly because the church has kept his fire burning in the world. But now is the time when we must look for Christ first and foremost within our own hearts rather than the church. This is moving from childhood to spiritual maturity.

It is not too far-fetched to see the world as going through a kind of crucifixion at the moment. I anticipate things will become worse. We will lose our humanity because we have lost the sense of ourselves as spiritual beings and with that gone there is no longer truth. There is no longer even the idea of truth. There is only constructed ideology formed from the whims of the moment and the requirements of those who set themselves up as our masters. We will see ourselves purely in materialistic terms and when that happens we are easily manipulated as we are now by fear. Things will get worse but I am not pessimistic. Heaven awaits those who reject the lies of the world, all-powerful as they may seem to be, and realise that today, Easter Sunday, records the most glorious, most wonderful and truest event in the history of the planet. Christ's resurrection from death really did take place and it is something we can all share in. We too will be raised from material death into spiritual rebirth once we open up our hearts to the love of Christ.

Posted by William Wildblood at 08:04

"Equality is only possible with complete oneness which means either the chaos of unformed matter or the Night of Brahma when the universe has returned to an unexpressed, unmanifested state which is basically non-being. Creation is a disruption of oneness which breaks the perfect equality of non-being. Inequality is the essence of manifested life, the very foundation of the world, and the current movement to erase qualitative distinction and differences is an attempt to destroy cosmic order and reduce light to darkness."

That's profound and very clarifying, thanks!

Excellent post, William. Your points about the overemphasizing of the horizontal at the expense of the vertical is something I have been circling around a great deal lately. Your thoughts on the matter helped me to clarify my own.

Thanks both and happy Easter! It's through writing that we all clarify our own thoughts, isn't it? It helps to bring out latent intuitions when you start to get stuff down on paper, so to speak.

Happy Easter William! And thank you for all you write.

Thanks Luke and NLR. Happy Easter.

Thank you William, (and Bruce who linked you). In a busy life it's good to imbibe others thoughts and intuitions, sometimes, as is the case here your words have validated my own intuitions.

"You can have quality or equality but not both", what a thoroughly inarguable statement.

Thank you Jon. It's obvious when you put it in those very simple terms, isn't it? But the nonsense goes back at least as far as the French Revolution when they pretended liberté and egalité were reconcilable or that you could have the brotherhood of man without the fatherhood of God.

As long ago as 1958 Joseph Ratzinger was arguing that the Church had become infected with the spirit of bourgeois worldliness and comfort. In 1969 he prophecied that the Church would become very much smaller than she was then and still is now. She would lose her buildings and her legal status and be driven back underground. And it is there that she will be rediscovered. People will be driven mad, he predicted, by a totally planned world and will find in 'the little community of believers' the complete andidote to that and much-needed refreshment for their souls and spirits. This is why Ratzinger, for me, is an all time great - incredibly prescient stuff, written at at time when the Zeitgeist, both inside and outside the Church, was all about marching confidently forward into the future.Things are panning out exactly as he predicted and I'm confident that the endgame will be exactly the same as well. It's not a nailed-on certainty, but it does seem like the only way that Christianity will recover its 'zing.'

Pope Benedict was (is) a saintly man.

Those who throw out higher & lower, indeed speak either without knowing & seeing or with evil.

Those who throw out equal also speak either without knowing & seeing or with evil.