A few people have commented on the cover of my new book Earth is a School. As with my two previous books published by Axis Mundi, I selected the cover from images associated with places near where I have lived. In this case it was Bridport in Dorset where I lived from 1985-1988. My first book Meeting the Masters has a picture of Beachy Head on the Sussex coast. I lived in Eastbourne from 1996-2000. The cover of Remember the Creator shows le Mont St Michel on the Normandy/Britanny border. I lived in the nearby town Avranches from 1988-1996. So you see I am working my way backwards. If I do another book it will have to be a picture of somewhere around Yercaud in South India where I lived from 1980-1985.

St Catherine's chapel stands on a hill near the village of Abbotsbury in Dorset in the south west of England. It's assumed to have been built in the 14th century from its style though no documents survive to confirm that. It was used by the monks of the nearby Benedictine monastery presumably for retreats for private prayer and contemplation. Although at 260 feet the hill is not very high it does command spectacular views over the coast and may have been used as a beacon for ships at one time, a light on a hill. So in a way there is a connection with Beachy Head lighthouse and le Mont St Michel. For me they are all spiritual beacons. 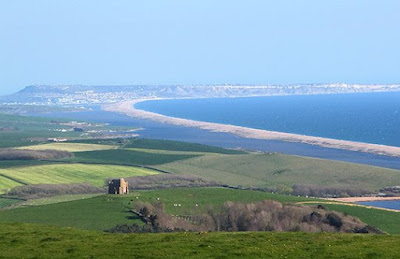 One of the others pictures I considered for the cover was a very striking image of the chapel under the Milky Way. The symbolism of souls ascending to the heavens in the form of stars was very tempting but, from a practical point of view, the image was probably too dark for a book cover. But here it is to compare with the eventual choice. 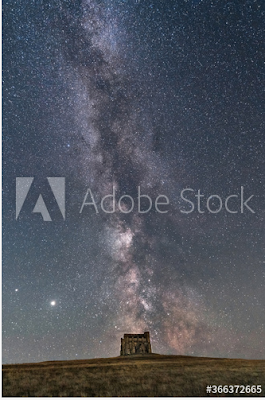 Because that is a sample from a picture library it has a watermark on it but here are two unstamped photographs fished off the internet. 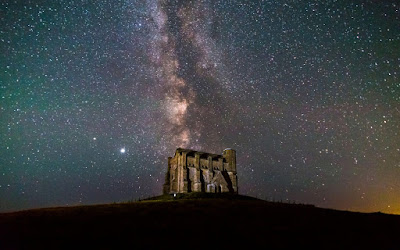 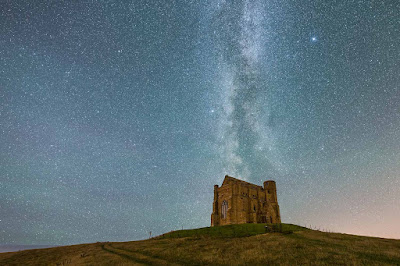 St Catherine herself was, of course, a famous Christian martyr who lived in the 4th century in Alexandria. Her nobility, heroism, devotion, wisdom (she is supposed to have beaten fifty pagan philosophers in debate) and unshakeable faith led to her being one of the most venerated saints in the Middle Ages even though most of the stories around her are probably legendary. Joan of Arc claimed that Catherine was one of the saints who advised her. In Orthodox Christianity she is known as a Great Martyr and Holy Helper. Her feast day is on the 25th November, by happy coincidence shortly after the book comes out. Legendary stories or not I am sure that there is such a person in Heaven.

Posted by William Wildblood at 10:22

Email ThisBlogThis!Share to TwitterShare to FacebookShare to Pinterest
Labels: Personal Stories, The Book

What an image! Looking forward to the book!

Thanks. You can't judge a book by its cover but a nice cover helps!

Well that’s three miles up the road from where I was born and raised. A truly magical place. I’ve stood at the point where that photograph was taken more times than can remember. Lived abroad for 25 years. Children are grown now. I shall be returning home soon.

Sorry I forgot to put my name. Sean Fowler.

I haven't been there for many years but it is, as you say, a magical place and I would like to go back one day.

Well when I get fixed up I’ll drop you a line. We’ll take a walk. Tons to explore in the surrounding area.