By No Means Equal - Reclaiming the Soul

I mentioned in June that I was finishing off a book to be called By No Means Equal. See the post here. The book was accepted for publication and the production process has been completed though the book won't be published until next October because, the publisher says, "It takes ten months (sometimes more) for information about your book to circulate through the trade worldwide, and this is essential to maximize your prospects of long-term success. Budgets for buying in new titles in the chain retailers are set many months in advance – they will not look at titles coming out before then. Some key catalogues, like the NBN sales catalogue in North America, the bumper Bookseller Spring and Autumn editions in the UK, cover six months of titles; they need the information on ISBN, page extent, price, sales copy and cover three months before that, so ten months only just gives us enough time." Luckily the book is not topical!

The book is actually called By No Means Equal - Reclaiming the Soul because although it started off as a discussion about how the idea of equality was founded on a false metaphysics, it became clear early on that this metaphysics is based on a denial of the spiritual component of man, even a denial of the very notion of individuality. So it turns out that the rejection of equality is actually an assertion of spirituality and, far from equality being humanistically grounded as it is generally portrayed as being, it is in fact a profoundly anti-human doctrine. Thus, the book is not just about equality but also a plea for the recognition of spirit and soul.

Here is the front cover. As with the covers of my previous books it shows a place I have lived, in this case the Shevaroy Hills in South India. 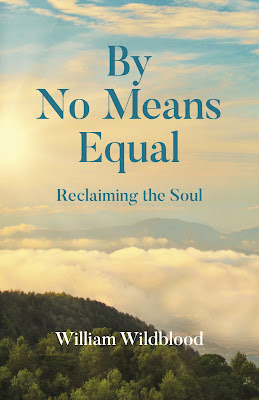 And here are the chapter headings. Some of these chapters have appeared as posts on this blog, though have been edited and sometimes expanded for the book, but many are new.

No Rational Basis for Equality

We Are All One

Don't You Want to Live in an Equal Society?

What Is the Great Modern Orthodoxy?

An Attack on Cosmic Order

What Is the Devil Most Seeking to Destroy?

The Descent of Man and the Prophecy of Hermes

Technology Is Not Neutral

Why I Am Not a Conservative

The Lowest of the Low

Good and Evil, Spirit and Matter, Creator and Creation

A Universe of Persons

Posted by William Wildblood at 11:30

Email ThisBlogThis!Share to TwitterShare to FacebookShare to Pinterest
Labels: The Book

Wonderful! That is a beautiful cover and it sounds like it will be well worth the wait.

Thanks very much, David.

While this is probably blasphemy for an American to state, I truly believe that phrase "All men are created equal" has led to the current destruction of the West. Now, I'm not arguing to mistreat or oppress anyone. Hierarchical societies sometimes did permit injustices against people of lower rank. I'm not negating the importance of social mobility. However, no two people will ever be equal. The pursuit of equality has led to a leveling of the lowest common denominator in every aspect of society. It is definitely a satanic attempt at destroying creation.

I am looking forward to reading your book. It is vital to address the natural inequalities of man from a Christian perspective. Many secular right wingers have realized the fantasy of equality. However, they do not hold love for people of lower state. In fact, many secular right wingers advocate abortion and euthanasia of "unfit" people. The Christian will realize that while men are not equal, they are loved by God and are placed in their particular station to best prepare their souls for the world to come. We need to address natural inequalities from a place of love; not resentment as the left or contempt as the secular right does.

Funnily enough, one of the chapters does touch on the 'all men are created equal" idea and mention that some historians have suggested that we have misunderstood what it was intended to mean.

Yes, you are absolutely right. Rejecting equality must be done in the name of love or else it is just an an excuse for the strong to dominate the weak which is the reason the idea arose in the first place. If it is done to further power then it is evil.

It is a shame that 'equality' has been both overly simplified as a concept and misapplied as a descriptive term...As you say, the very idea of "all men are created equal" has been widely misunderstood.
For, within the context, it is clear that the intended meaning is not that every human being is inherently equal to (i.e. the same as) every other human being -
- rather, it is that we all deserve to be 'equally' treated with 'equal consideration' of our inherent individuality and as well, to be judged with 'equal objectivity' in matters where assessments of individuals against one another must be carried out.

I mean, even with the beginning of the "Equal Rights" movement - the earliest feminists were not looking for some militant 'women are inherently the same as men'(and should be treated as such) concessions....

...it was about (in the broadest sense) "equal pay for equal work", meaning that in cases where a given job was being done, with identical capability, by both women and men - their wages should be exactly the same (which, historically had not been the case).

I do think that, as with most of the various divisiveness 'agendas' we've seen playing out these past many years - the misappropriation and misapplication of the "equality" concept has been quite deliberate on the part of those in power, and you're absolutely right that it has been done to evil purpose.
Carol

I don't think it serves anyone to interpret things residing in the book we have not seen yet. Do you trust William to bring up a worthwhile and interesting narrative? I do, without question.

I believe we are all intrinsically equal we just differ on where we fall on the ignorance/enlightenment spectrum - but God's intention is for all of us to eventually become enlightened and end up in the same place, and rejoice together as equals.

That is the most beautiful vision to me.

However it's undeniable that in this world some of us are more enlightened and some more ignorant - and it is a challenge to juggle the dual vision of immediate inequality with ultimate equality.

I may see someone acting evilly out of ignorance, but I must not think I am intrinsically superior to him by any means, and must regard him with compassion and render what assistance I can to help him realise the true Good - which may not make a great deal of difference in his current life.

I also believe in "skillful means" and if the notion of intrinsic inequality helps someone embark on the spiritual path that culminates in transcending such limited notions, then that is good :)

I sometimes wonder William if I misunderstand you and you are really a great Bodhisattva using "upaya" in your dealings with Bruce Charlton and others here.... :)

What "really" happened to you in India, William?

Perhaps you've returned to render assistance to your suffering countryman in the only language they can understand at the moment.

More and more my I see the importance of drawing from Vedantic and Mahayana conceptions in my understanding of Christianity, and the future of Christianity and religion in general will involve a truly universal cross fertilization.

And also a small quibble -

Equality does not obliterate individuality.

Men and women have highly individualized set of traits (well to a certain degree - it's a spectrum and there's much crossover), but are equal in the contribution they make to the spiritual whole.

Men are stronger than women - but the qualities of weakness - gentleness, nurturing, compassion, yielding, flexibility, have equal value in the spiritual whole.

Perhaps the simple tragedy of modernity can be summed up in the notion that strength is superior to weakness, domination and mastery being our highest calling.

In that sense the notion of intrinsic inequality has done tremendous damage, rather than seeing things as complimentary.

Certainly Jesus and the early church fathers understood the value and importance of weakness well, how it is even a kind of strength.

But that had to be forgotten before modernity could commence.

I would say we all have divine potential but calling it equal undermines the beauty in creation because equality is not an attribute of living beings. Rather it is a characteristic of mechanical, dead things. Equality is what defines the reign of quantity as spoken of by Rene Guenon. That is why the idea only really arose in a materialistic age.

I am by no means a Bodhisattva! However, I have learnt a lot from Eastern religions and I do think an understanding of them has deepened my generally Christian spiritual approach.

At the end of time, God will be All in All, as the beautiful saying in Corinthians has it, and God's plan of a wholly Good creation will be realized.

A realm of rich individuality but all equally contributing to the wholly Good realm in which there is no residue of evil left.

But even here one must be cautious, as "bad" things may be a necessary stepping stone in the life of an individual towards Transcendence, a bad philosophy or ideology may serve it's purpose, and one must use skillful means rather than trying to crush it out.

And the intrinsic equality of all moving towards the realization of total Good is useful to meditate upon!

Thanks for your reflections, William.