Yesterday was a beautiful sunny winter afternoon and I walked further than I had intended, going across the local common and on into some woods beyond that I had only visited a few times before. There is supposed to be the remains of a Roman villa somewhere around there but you'd have to be an archaeologist with a trowel to find it. As far as I can tell there is nothing more than some sunken ground where once it might have been. Still, it is nice to think that there was something of the sort there at one time. It reminded me of when I was at a school and we had a Roman tea party during which we were all supposed to speak in Latin (it was that kind of school). There was dormouse and honey on the menu, a Roman delicacy apparently, but I think we had dormouse substitute.

When I came out of the woods it was still light though the sun was about to set. In front of me was a wide stretch of farmland which was all newly sown grass but the farmer had kindly left a path through which you could walk to get back to the common which was my route home. In the middle of the field there was one solitary tree standing rather like a scarecrow. He had lost all his leaves but stood proudly like a sentry on duty. "This is my field", he seemed too say. "You can cross it but don't linger too longer or trample the young grass." 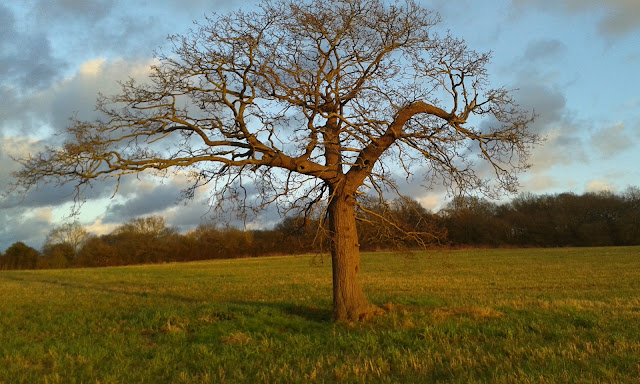 So I began to cross the field and then I saw some deer in the distance at the other side of the field, near to the wood in the photo. Roe deer live on the common but I've only seen them twice in five years. They saw me and scampered away before I could take a picture. I thought of the contrast between the tree and the deer, both aspects of God's creation but completely different. One, strong, immobile, commanding, seemingly ancient. The other, swift, graceful, nervous, youthful, always on the go. What contrasts but both part of God's prodigious self-expression.
I looked behind me and there was the sun on the horizon, shining brightly though with a wisp of cloud over it. I looked ahead of me and my shadow stretched way out into the distance. 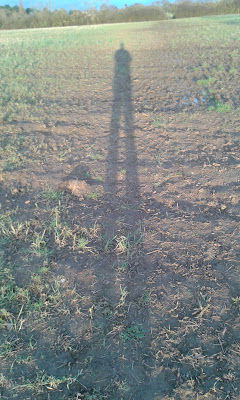 I looked back again and saw that the cloud had left the sun. The land had now become a deep orange. I took another photo. There is just a 30 second gap between the two. 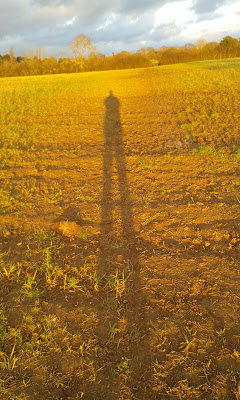 What a change. Some of it might be due to how I took the photo though I don't think I did anything differently. To be honest, I wouldn't know how. All I can say is that the second one is an accurate depiction of the rich ochre glow of the early evening light.
However, it didn't last long and when I got to the other side of the field and entered the wood it was starting to get darker. The ground was quite muddy and I knew that if I took the quicker path that went straight through the wood it would be even muddier. But I heard some Canada geese honking furiously from the pond which is on that route and thought I would see what the fuss was all about. There was a stand off between a couple of geese and a heron, for fishing rights perhaps? The geese were very vocal but the heron didn't seem perturbed. Eventually however, he lazily took to the air and drifted away to the other side of the pond. Who needs noisy neighbours?
Walking through woods and open clearings like this field is one of the things that can connect us with our ancestors and the ancient ways. It's one of the few activities we share with them. I go for a walk every day with longer excursions at the weekend. For me it's a time of contemplation when I can look up at the sky envisaging it as the vault of heaven or try to contact the life force that runs throughout nature, expressing itself in a myriad different ways. Even in today's world when both God and the gods have been chased out of our lives we can still go for a walk in the country or, if not that then at least, a park and capture something of the magic of the true reality behind everyday material existence. We need this if we are not to dry up and wither spiritually inside.
Posted by William Wildblood at 11:19

I walk almost daily ,and when alone always pray and worship God. I am blessed to have beautiful dirt roads in all directions with very few houses around. It is the best time for prayer. I also often think about all the people, that were most likely Christians, who built the beautiful stone walls across the fields and created the winding roads that I find so lovely. I love to think about how they kept warm, and the sheep and other animals they tended .I wonder how often they went to the nearby town for provisions or maybe a dance. I often pass an old graveyard and can imagine the carriages by the road at a funeral. I feel very connected to the people that farmed my area. My ancestors were farmers, though not in this area. There is nothing like walking and connecting to the land around you every day. I feel genuinely grateful to the people that created the beautiful landscapes I see and find so healing to my soul.
England sounds so lovely and I would love to walk your woods and fields some day. I have some Ancestors from England and others from other parts of Europe.
Nice to hear about your walk.
Sue

Thanks for your comment, Sue. Unfortunately where I am you can still often hear the hum of ever-flowing traffic but there are still a few parts of the local area where modernity doesn't intrude.