Renewing the Pagan in Me

I live just outside London and, though it is not the country proper, there are several local walks that take me into woods and onto downs and there is even a nature reserve not far away. I go for a walk every day, roughly an hour and a half in duration, but at the moment I can only walk in daylight at the weekend though I also enjoy tramping around in the dark especially when the moon is out or a clear sky shows lots of stars.

A couple of weeks ago I went up onto Epsom Downs which is a large open grassy area on elevated ground. Because it is so open you get an excellent view of the sky and can take in its vastness so I spend a lot of time there just looking up. I saw this intriguing cloud formation. 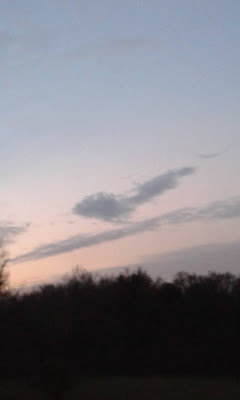 It's Great Britain, isn't it? Floating up in the sky. Some of the Scottish islands even show up at the top. You could also, exercising some imagination admittedly, take the long thin strip of cloud beneath it as the Continent.

Last Saturday I went to the nature reserve mentioned above. To be honest, calling it a nature reserve is a bit of a stretch. It's really just some scrub and chalk grassland that has been reclaimed from abandoned playing fields but apparently the original field was mentioned in Magna Carta and artefacts dating back to the Neolithic and Bronze Ages have been found in the vicinity. Pottery, flints, that kind of thing. The current reserve is about 80 acres in size and there are often sheep and cattle grazing there. Skylarks can be seen too if you're lucky. But this time all I saw in the sky were some more clouds in the evening sun. "Hello" I said to myself, "It's the Himalayas over Surrey". 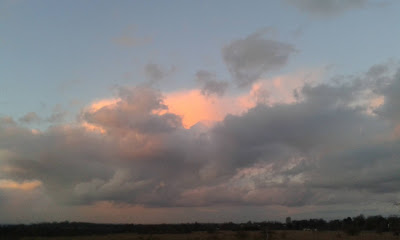 Well, it looked more like the sun on snow-capped peaks a few seconds before I took the photo.

I carried on with the circular walk around Priest Hill, as it is called, and came across a small group of cattle. 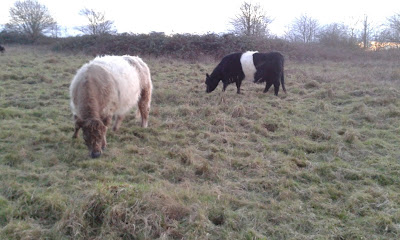 For some reason I took a fancy to the brown and white one and we exchanged a few pleasantries about the weather and if the grass was good. Then she lost interest and went back to her herbivorous duties. But she is pretty, isn't she? At least, I think she's a she. 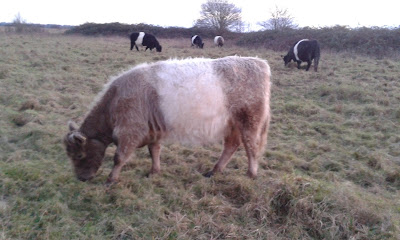 The next day, Sunday, I got up early just before sunrise. Looking out of the window I saw a dramatic conflagration. It was a visual Gloria, the angels cheering the dawning of day. I thought of Phoebus Apollo hitching his chariot to the sun, the horses snorting and stamping their hooves, impatient for a headlong charge across the heavens. 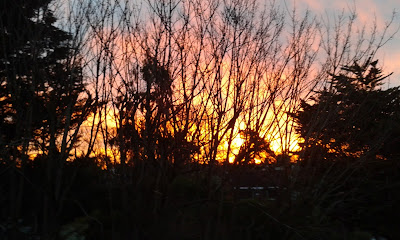 Then shortly afterwards it began to snow. To go from fire to ice in a couple of hours was quite a contrast. 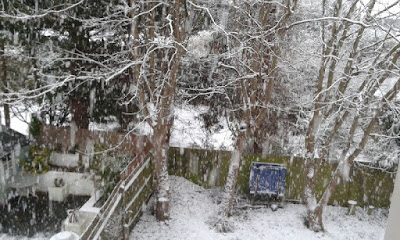 In the afternoon I went for a walk on the local common. It's called a common but is now more of a wood with mostly oak trees though there are many other varieties such as ash, birch, hazel and holly. It covers over 400 acres. There are a couple of large ponds, one built by medieval monks as a fish pond, and various forms of wildlife including roe deer which can be seen occasionally if you are quiet. There are adders and grass snakes and several birds species amongst which are yellowhammers in the right season which is not now. The ponds are visited by heron, grebes, geese, ducks and teal and, though I've never seen one there, kingfishers too, by repute anyway.

There wasn't much to be seen yesterday though I did hear owls in the late afternoon. The ground had recently been very soggy because of all the rain we've been having but the snow and freezing temperature had made it quite hard and pleasant to walk on. The inclement weather also seemed to have deterred other walkers for I saw hardly anyone else out.

There is a particular tree on this walk that I have decided is the Lord of the Forest. He stands a little taller than the others but it is not that which gives him his air of authority. He seems to spread further and be planted more deeply than those around him. Other trees stand back from him a little, respectfully giving him the extra space he merits. On a couple of occasions I have asked for his advice, talking not just to him but to the Creator through him. I once asked him for a boon to do with my family and felt I should make an offering of some kind. All I had in my pocket was a pencil and a handkerchief so I gave him the pencil, throwing it in his direction. The boon has not yet been granted but I know these things work out in their own way and their own time. 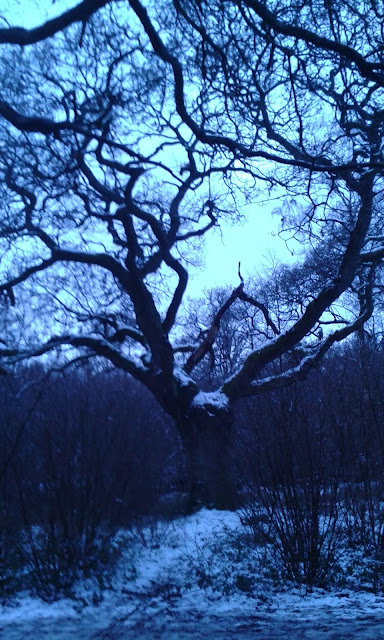 I don't know if readers find this sort of thing foolish or superstitious but I can understand our ancestors worshipping objects of nature. For the wiser among them these objects might have been important not so much for themselves but as mediums through which to access spirit. If, as this tree seems to do, they carry some special quality, if they manifest some almost archetypal power, they can be channels to the divine world.  I don't live in a world of original participation when Man and Nature were not fully separated out, but I can sympathise with that state and, while realising the impossibility, indeed spiritual error, of trying to recapture it, still believe that we should attempt to perceive the immanence of nature, the presence in created objects of their spiritual origin. If I talk to the tree I am really using the tree to talk to God. The tree is not an idol, sacred in itself, but something like an icon, a focal point for the divine and a way through this world to a higher one.

Posted by William Wildblood at 16:29

Thanks. It's a little outside my usual sort of thing but was fun to do.

Oh, I don't think it's foolish at all. I write and reflect constantly on my belief that all of creation, including trees and rocks and soil, are sentient and aware and at work. I appreciate your observations here.

Thanks S.K. I agree that trees, rocks etc are sentient and aware and work in their way which is not ours but is still part of the ongoing process of creation.

@William - I guess you would agre that until Christians stop thinking of this kind of thing as 'pagan' (or theologically suspect) then we still have far to go!

I am continually amazed at the number of self-identified Christians on youtube and the internet who - for similar reasons - excoriate Tolkien and Lewis's fantasies as anti-Christian.

There seems to be a Christian tendency to downplay or even be afraid of creation and not to see the spirit working within. Such a mindset fails to distinguish between the fallen aspect of Nature, its corruption by Morgoth you might say, and Nature itself which is good. "God saw everything he had made and, behold , it was good." I presume it's also an over-reaction to the earlier habit of worshipping nature or nature spirits.

I think there is something wrong with a person who does not experience this type of spontaneous sacramentalism. I'm a walker who makes the most of what is near at hand, so I really enjoyed this post. I oppose the prejudice that spiritual discourse must be abstract. I would much rather hear about that one particular tree than about trees, or vegetation, or life, or nature, or reality. Your great tree in the wood seems much closer to my own great tree than either seems to an abstraction like "vegetation."

Thanks and I absolutely agree with your first sentence. I will never forget being on a bus once going over the river Thames and seeing a really beautiful sunset both in the sky and also reflected in the water. Everyone else on the bus just kept on looking at their phones or newspapers I wanted to shake them!

Not personifying or communicating with nature is an unfortunate effect of monotheistic puritanism as well as secular materialism. Nature is seen as impersonal and empty, like a dead landscape of equal and demystified matter. It's like fearing a woman, objectifying her.

The challenge is to find a balance between the extremes of spirit and matter. We neither want God without nature nor nature without God. We don't want to be completely spellbound by nature and her beauty, nor do we want to grow estranged from her. She is a tough lover and not easy to master. Apparently, the west has given up taming her entirely, putting her in a leash. As a result, we lack in wisdom.