An acquaintance who read the previous post on paganism made some comments on it which I reproduce below in the form of a question together with my response to it.

Q. Why do you say you must go beyond the Goddess to find ultimate truth? I regard the Great Goddess as the primal source of life. I accept that unmanifest Oneness transcends sex but prefer to visualise it in the form of the Goddess who gives us birth and death. What is wrong with that? After all most of the earliest religions of humanity were matriarchal. I follow the pagan path because I like its full acceptance of the natural world which so many religions look down on. We honour the divine as manifested in nature and try to live according to its seasons and cycles. And we have a solid ethical teaching expressed in the maxim "As long as it doesn't harm anyone, you may do whatsoever you will".

A. I would not say anything is wrong, as such, with using the concept of the Goddess as a symbol for Unmanifest Oneness, if that is the way you prefer to look at things, mainly because no way of visualising divine reality can begin to come close to the truth. Therefore all fall short, and equally so in the face of the infinite. However some forms are closer approximations than others, and more metaphysically correct. And some are relatively true while others don't even come into that category. If we take the masculine and feminine polarity as based on something real, and not just arbitrary designations that are interchangeable and have no fundamental meaning, then we must see each in its proper light, and neither should usurp or imitate the role of the other. It is the case that all traditions based on revelation envisage the universe as the product of two primal principles that issue forth from unmanifest Oneness, and these are the origin of what appear in the human being as masculine and feminine. The masculine corresponds to essence and the feminine to substance so the Goddess, the Mother (and it is surely no coincidence that matter and the Latin mater are etymologically so similar), is not the creator but the womb in which creation takes place. She does give birth and death but to form not life. Life, being, comes from the Father. To confuse roles is not to see clearly and implies the intervention of thought and the personal self with its own agendas rather than true, unbiased intuitive perception. As the Masters said, we need to make sure that our spiritual vision is not coloured by wishful thinking.

Early religions were matriarchal because humanity at that time was bound up in nature and unable to see beyond the natural world. People then could sense the presence of spirit immanent in matter but did not know transcendent spirit. That is why they tended to be pantheistic and were unaware of the reality that transcends nature in whose light nature is revealed as not absolutely real in itself but real only as the activity of something deeper and more fundamental. That is not to downgrade nature at all but it is to see it in its true perspective. No true religion looks down on nature but it will regard it as subsidiary to God, which it must surely be or else when your body dies so you would too. Neo-paganism certainly believes in spirit but it inverts the true hierarchical relationship between spirit and nature for it tends to see the former as an aspect of the latter rather than vice versa. At the very least, the relationship is viewed as one of equals, but nature is an aspect of spirit and not truly real in its own right. That is why I consider paganism to be, in a certain respect, materialistic though, of course, it is so in a quite different way to a belief that denies any kind of reality to spirit at all.

You speak of Unmanifest Oneness but the metaphysical truth of this is not central to pagan or neo-pagan practise. In fact, in the pagan scheme of things, it is conceived more as a raw energy or power diffused throughout nature than pure transcendent spirit, and it has probably only acquired its higher overtones through the influence in the 20th century of such things as Kabbalah and other forms of Western occultism.

As for the maxim you quote, it sounds very reasonable, but it sums up the ethics of the natural man not the spiritual man.  A secular materialist would not find anything in it to disagree with. There's nothing wrong with that either but it doesn't take you very far beyond where you are now. It does not light the way to your true spiritual being. It will not lead to what I called in a previous post the sanctification of the soul. There is a much higher teaching in the Lord's Prayer, and it is contained in the words "Thy Will be done". Not your will but God's will. What is God's will? It is very simple, that you renounce the personal will and go beyond the natural self which you don't reject but don't identify with either. How can you go beyond the 'you', which is the goal of spirituality, if you "do whatsoever you will"?

The pagan remains locked in the natural self, as you imply when you say that you honour the divine as manifested in nature. That is a worthy practice but there is so much more to divine reality which is why you will never see a pagan of the spiritual stature of the Buddha or Christ. I don't mean by this that anyone should reject paganism, but you have to go beyond it. On its own it is not enough. You have to go beyond the forces of nature. You have to go beyond the powers and energies of the material world, and all levels of it for the material world is not just restricted to the physical level.

And how do you know what harms unless you have spiritual vision? Something may not harm the outer person but be severely detrimental to the soul and its development. Things you do, actions you make, choices you take which seem to have no outer consequences as viewed by the standards of this world may be spiritually retrogressive. It simply is not good enough to say that you can do what you like as long as no one else is harmed by it. You may be harming yourself without realising it if you ignore the deeper spiritual teachings in favour of that ideology. Of course, you have the right to do whatever you wish because we live in a world of free will but if your actions, or even your thoughts, go against God's laws, which are the true coordinates of your own being, you will bring consequences upon yourself. At best, you will remain where you are which is fine if you're happy there but there is a long way further to go than your current state. 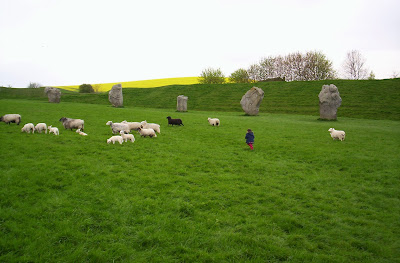 This is a picture of the stones at Avebury with some local inhabitants. I love the prehistoric sites of Great Britain, and visited those in Wiltshire and the West Country as regularly as I could when I lived in the area which I did for a number of years. There is still a sense of mystery and dormant power to be sensed in these places, and I can sometimes imagine that I lived in the distant times when they were functioning sacred centres, and that I took part in the rituals that were enacted there. Rituals when the veils between the worlds were lifted and the gods appeared to bless the worshippers. I don't doubt that this was what took place at these holy sites. They were not just areas where the tribes gathered to perform fertility rites or worship as modern people go to church. They were places where things we might call spiritual could actually be made to happen. But that was then. It is right to reconnect to the truths known then and subsequently forgotten but it is not right to try to live those times again. The wheel has turned and humanity has moved on. Paganism is a religion of this world but we must go beyond this world and beyond nature to find truth.
Posted by William Wildblood at 15:07