I've been thinking of late about the picture in The Last Battle that shows all the inhabitants of Narnia and other countries of that world at the Last Judgement. 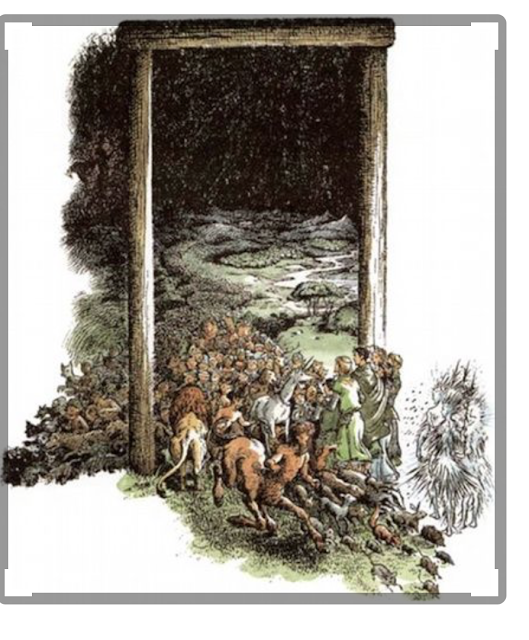 This isn't a very good reproduction but what it shows is the time at the end of time in Narnia when the world is dismantled and put back into chaos. It has run its course; its work of soul-building is over and all the Narnians are making their definitive choice. Aslan stands at the doorway that leads into the higher worlds and as every being rushes towards that doorway, away from the destroyed world, they look into his face. What they see there either fills them with love and they rush through the door or else horror or fear or disgust and they veer away to the left (their right) into darkness. An important point is that they make the choice. Aslan is not judging them. They are judging themselves. He just stands there and is himself.

I believe that something like this might very well be what we will experience. It presumably won't be quite so obvious as a door with light and darkness on offer but it will be simple. And though it will be Jesus who stands there I don't think it will be the Jesus we are familiar with from art. Perhaps a face or a light to which we will respond with joy or rejection based on our inner spiritual state. It will be an instinctive thing, thought or analysis or deliberation will not be involved. We will see love and glory as a fire but, as I said in a previous post, fire can warm and illumine or burn and destroy. Our choice will be determined by what we are inside and we will turn to light or darkness.

I am more and more convinced that this is a time of decision. Yes, I know people have always said the end of the world is just around the corner, right from the very start of Christianity. But really the signs are everywhere now from the widespread atheism and materialism to the secularisation of religion to the rejection of instinct and nature and common sense, and I could go on.

Regarding this latter, it is interesting to speculate why this might be. I think there are two reasons. The first, as I have often said here, is that when the Creator is rejected it is not long before the natural order of creation is rejected too. If it comes from nothing then it has no inherent meaning and you can give it any meaning you wish which is what we are doing.

But secondly, I would point to something less obvious. When intelligence is prized, as it is now albeit in a very restricted and limited form, and people are educated to think human intellect is the highest way to perceive reality then something quite odd happens. Unless this intelligence is balanced by faith it, as it were, goes rogue. People think in increasingly abstract ways. They embrace thought-constructed ideologies and abandon instinct which is perceived as a form of ignorance, superseded by mere braininess. This leads to a separation of the mind from reality. It is on its own, cut off by itself from its deeper source.

Human beings are meant to evolve from instinct to intelligence to intuition. The intellect is, therefore, a more advanced form of mind state than instinct. However, instinct is tied to reality in a way than rational intelligence is not. It falls in with truth (on its own level) unconsciously but it does fall in with truth. The intuition responds to truth consciously and is more advanced still but the intellect is severed from reality and has to approach it dualistically meaning there is always a separation from the thinker and his thought. This is not the case with instinct and intuition. There is no separation and therefore there is accommodation to what is.  The human mind without instinct or intuition to guide it is on the outside of reality and cannot know it.

Intellect is purely human. Instinct is shared with the animal kingdom and the intuition is the mode of cognition in the true spiritual world. If we develop intellect but fail to develop intuition then we are at the mercy of all kinds of craziness. I mean that literally. Instinct keeps the ignorant on the right track. Intuition brings us into conscious harmony with God and the universe but intellect on its own risks a kind of insanity if we define insanity as an inability to see and live according to reality. In the past we were told that reason needed to be balanced by faith and this is wise for those who are developing mentally but have not yet grown into intuitive ways of understanding. Faith keeps you sane. But when faith is rejected and reason or, it must be said, so-called reason because much modern reason is unreasonable, assumes complete authority then the trouble begins.

Why have we not started to develop the intuition in any serious sense? Some people have but many more have not and these unfortunately set the agenda and run the world nowadays. This takes us back to the picture at the beginning of the post. They don't want to. There is a pride and self-will in them that rejects the idea of God and so they make no attempt to open their minds to higher things which is what you have to do if you wish to grow in intuition. If you want light to come into the room, you have to draw open the curtains. It seems that many people don't want spiritual light to come into their minds, at least not on the terms required. And that is down to pride. It is this refusal to open their minds to God which will make them turn away from His Face at the Last Judgement.

Where do they go, these people who have rejected God? Hell, but what is hell? I would say it is a reflection of their inner state of consciousness so their spiritual environment will be a manifestation of their own mind just like the dwarfs in CS Lewis's story who are in a beautiful place but think they are in a dirty, dark, smelly stable. If human beings disobey God's laws they will inevitably descend to a lower state of consciousness where they will remain until they change their attitude. This is not a punishment but a simple result of like attracting like. Hell is just the mind that has separated itself from God
Posted by William Wildblood at 12:06

@William - (Although I have interpretations that differ in details) The Last Battle is indeed a remarkable book that has been of significant help to me.

I tend to suppose the fierceness of Aslan corresponds to the truth that choosing Heaven is not choosing a blissfull, quiet, Nirvana-like state of contemplative rest (which I why I dislike the phrase Rest in Peace, used generally of everybody who dies).

I'm sure there is peace and rest in the Heavenly life; but I'm equally sure that is not the main point of it. Heaven is for Doing as well as Being (creation is a verb as well as a noun!); it is a life (I think) essentially active and creative and cooperative - in particular cooperative with God and his purposes for creation; so those who choose Heaven must choose all of that.

So that stern look on Aslan's face, and the fact that he is a lion, correspond to the 'demands' of Heavenly life. And death is indeed like a portal or 'doorway' - passing through which is also a transformation.

Lewis presumably believed that resurrection was universal, and came before judgment - but for me it is restricted to those who choose Heaven; so I would need to show a spirit 'condensing' to incarnation as it passed through the doorway - resurrecttion and choice being part of the same process.

Excellent point about Aslan, Bruce, who, of course is not a tame lion, not nice as discussed recently. And yes absolutely. Heaven must be active and creative. Rest is all well and good but eternal rest? No thanks! God is ceaselessly active as we can see in creation and that shows us what the true life is intended to be.

"Unless this intelligence is balanced by faith it, as it were, goes rogue. People think in increasingly abstract ways. They embrace thought-constructed ideologies and abandon instinct which is perceived as a form of ignorance, superseded by mere braininess. This leads to a separation of the mind from reality. It is on its own, cut off by itself from its deeper source."

William, your blog posts have always been enlightening and engaging, but you have truly been firing on all cylinders lately. Faithless, rogue intelligence - this is exactly what we are dealing with in the intellectual realm.

I made a similar observation in my fiction -

"Isn’t it obvious? Never in the history of the world has the planet been flooded with many so-called educated and enlightened individuals clutching their precious little degrees, yet what has this expansion of education and enlightenment brought us? Why, a perishing society, of course!”

You're absolutely right, Francis. A plethora of clever people have brought nothing but spiritual disaster in their wake. What is the perfect example of intelligence carried to extremes without faith? It is Satan. His lack of faith is not so much unbelief for he must believe in God. It is rejection of God as his creator, exactly what our modern day intellectuals do. These people do not so much not believe as not want to believe which makes their action a moral sin in my view.

There's much talk in Catholic prophecy about a 'warning' which is to come to all of us sometime shortiy before the great chastisement to come. No-one's sure exactly what form this will take - a light in the sky, a verbal message, etc - but the point of it is that when it happens every single person in the world will know that Christ exists and is calling them. It will be the last chance for people in general to turn to Him. But it's also added in these prophecies that there will be many who won't accept him, despite the overwhelming evidence, because they've already cast their lot with the other side and dislike Christ intensely.

The Narnian apocalypse has been a foundation stone of my imaginative life for over forty years now. It's a very dynamic heaven indeed - further up and further in. We see this heavenly dynamism at play again the The Great Divorce.

I agree with Bruce. I always like to say with regards to the dead, 'May the rest in peace and rise in glory.' Not a perfect formula either but at least it brings the dimension of glory in and saves us from eternal rest and repose!