I don't know whether or not the Shroud is authentic but it seems, as far as I understand the matter, that the weight of scientific evidence is tending more and more to the conclusion that it might be. Numerous tests on everything from the cloth, the blood, the image and how it might have been made, the wounds and how they are in keeping with what modern research says they would have been, even pollen found on the cloth, all point in the same direction. This could have been the burial shroud of Jesus. And significantly, despite the best efforts of researchers, it has not been proved to be inauthentic. Considering that it was manufactured, if it was manufactured, by, at the latest, the 14th century since when the existence of the Shroud has been recorded, this is remarkable. Any techniques in use at that time should surely have been relatively easy to expose with today's technology.

But, as I say, I have no idea of its authenticity and I think the position of the Catholic Church, which has neither endorsed nor dismissed the Shroud but regards it as an important relic, is a wise one. There are two things I would like to say about it though.

The first is that if I were told that it had been conclusively proved beyond any doubt (which is probably impossible but I present it as a theoretical possibility) that the Shroud really was the burial shroud of Jesus, I would not be disappointed. I am talking about the face. 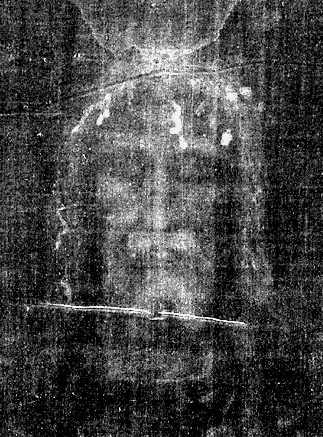 It is a face of such nobility and majesty and wisdom and suffering borne without self-pity or complaint then it could well be that of Jesus. No other face I know of from painting or photographs has this effect. This is the face of someone I could follow. A man of sorrow but also a man of power. It is the face of a king. It's often said that you can't judge a book by its cover but, spiritually speaking, that's not the case. For someone like Jesus, the outer would reflect the inner just as it does in heaven, and I have no doubt that his physical appearance would have drawn people to him almost as much as his teaching. For his  appearance would have been the natural expression of his spiritual state within the parameters imposed by his parentage.

The second thing is that, authentic or not, the Shroud could well have been given to Christians as an aid to faith, especially at a time like ours when everything external purports to explain religion away. Not a substitute for faith, which is why it will never be proven to be the shroud of Jesus, but an aid. There is just enough about it to convince those who want to believe, and maybe some who hesitate at the borders of belief, but not enough to silence doubters and deniers. That's as it should be. Belief should never be forced but always be a personal choice, based on intuition though aided and abetted by intellect. Reason, rightly responded to, will always point in the direction of God but you need something more to make intellectual understanding develop into spiritual conviction. Faith is the opening up of the mind to higher reality. The Shroud, the noble face, the miracle of its existence and its apparent witness to the reality of the resurrection, can be a material support to faith at a time when not much else is.

Posted by William Wildblood at 10:47

@William - I can't really see the qualities you describe in the actual shround - but I can in some of the pcitures made from it, with eyes added.

to me it's just the opposite! I don't think pictures made from it with eyes do it justice at all.

In St. John's Gospel, there is not much in the way of teaching; it is rather the presence of Christ that one experiences in reading and pondering its passages. I think you are right, William, that people were transformed by the very look of Christ. And the words that He spoke went straight into the soul and awoke a response there that went beyond whatever meaning they might have had as conventional language. If a sincere seeker,two thousand years later, can be moved and transformed by the power of the Gospel, i.e. by the presence of Christ it enlivens in the soul, what great effect must the presence of Christ in the flesh have had. The Shroud is important because Christianity makes historical claims. If it renounced such claims and contented itself with being an ethical or philosophical system, no one would have been so avid to disprove the authenticity of the Shroud. But the logic is: if the Shroud is fake, Christianity is fake. I think it important to note that the face on the Shroud was not discovered in its full detail until it was photographed: we are seeing a negative image that was first viewed in the 1890s. No painter could have managed to produce this. And carbon dating, theoretical and subject to widely varying parameters, brought nothing definitive to the debate and only cast doubt on the motives and procedures of some of the participants. I am not attached to relics, despite having grown up Roman Catholic, and I doubt that seeing the Shroud would move me very much. But the face that appears on the negative photographic image is something to ponder.

edwin, it's the spiritual power of the face that makes me think that there is a mystery in the religious sense here. I don't know if I am reading things into it since the image is not clear but I see a gravity, a dignity and a solemnity in it that is deeply moving. The long narrow face and nose and deep-set eyes have a quality I just haven't seen elsewhere.

It is as a direct link to or reminder of the personal nature of God that I find it so awe-inspiring, and I am using that phrase literally.

I know next to nothing about the Shroud of Turin, but I'm not sure how it could help someone become a believer. Jesus' burial shroud, supposing it to be authentic, would be evidence only that Jesus lived, died, and was buried -- and even most atheists will grant that much. I don't see what bearing it has on the question of his resurrection, divinity, etc.

I'm sure the real Jesus had a suitably impressive physiognomy, but the face on the shroud doesn't do anything for me; it actually looks a bit odd, with the eyes seemingly higher on the head than they ought to be -- but perhaps all that means is that I am not as good as you at mentally reconstructing a living, breathing face from an imprint left on a shroud.

I just mean it might tip the balance especially as the sub-text to the image is that it was made by some burst of energy that took place at the resurrection.

As for the face, I suppose it strikes people in different ways as it is not at all clear. Perhaps what are oddities for you are clinchers for me! But I absolutely agree that it is a personal thing.

Oh, I didn't realize it was supposed to have been made by a burst of energy. As I've said, I know very little about it. I had assumed it had been stained by prolonged contact with a body covered with myrrh and aloes, but I guess I should have known better. I know no one seems to hold the position that it's just an ordinary shroud of an ordinary person -- it's either Jesus' shroud or a deliberate hoax -- so I should have concluded from that that the image wasn't formed in any readily understandable way.

That said, it does seem to be the image of a corpse in repose, not of someone in the act of rising from the dead.

Ah, the burst of energy would be before the actual rising as it would be the cause of that!